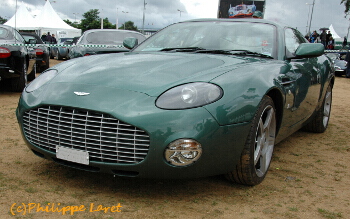 The project took his origin in 2001 during the competition of Elegance of Pebble Beach.
So almost one year after the initialization of the project, in August, 2002,
the DB7 Zagato appeared, in preview, for Pebble Beach.
Officially The DB7 Zagato was presented during the Show of Paris in 2002, it was built at 99 copies.

The base is realized wooden of green Sycomore, then varnish and polished.
The inside of the car received some improvements.