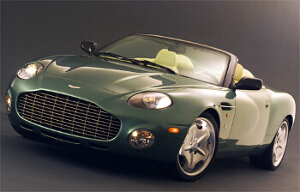 The DB AR1 (David Brown American Roadster 1), more dedicated to the American market,
was presented to the Show of Los Angeles in January, 2003.
The particularity of this model is that it don't have either hood or hard-top.
Built from a base of DB7 Vantage Volante, Zagato wanted one "real 2 seats".
As the DB7 Zagato Coupé, it was produced to 99 copies.

The base is realized wooden of oak, then polished.
The inside of the car received some improvements.