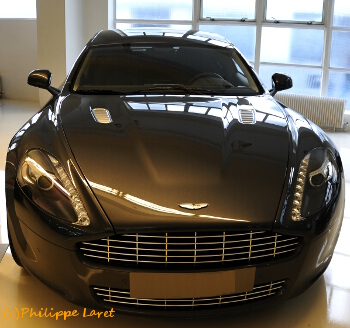 Deserving replacement of the DB7, the DB9, lines of which were drawed by Henri Fisker,
will be presented officially in the show of Frankfurt in 2003.
The production will begin in January, 2004 on the new site of Gaydon.
Of more, the DB9 inaugurate new architecture allowing to obtain an important weight gain,
without questioning the rigidity of the frame.

The base is in oak enhanced by a plate in mahogany.
The wheels and tires have been changed,
as for the interior it has received some improvements.
The logo DB9 is emphasized through a small plate in ebony.