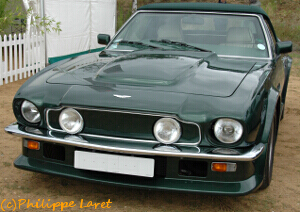 Eagerly awaited, V8 Volante made its appearance in 1978 with a homogeneous general line.
The frame of V8 was used and strengthened, what mitigated the lack of rigidity due to the loss of the roof.
Through its life cycle, V8 has big evolutions; year 1980 saw the appearance of a new generation.
Another evolution, rim BBS came to replace the older models in 1983,
and at the end of the year on 1985 a system of injection Weber Marelli was implanted.
V8 Volante was reserved at first for the American market, very applicant of this kind of model.
In 1986, the V8 Vantage Volante was unveiled at the Birmingham Motor show.

For the miniature, replacement of rims and tires for finer and more detailed models;
as for the inside it was worked again to obtain something more realistic.
The Aston Martin decals emblems have been replaced by photoetched emblems.