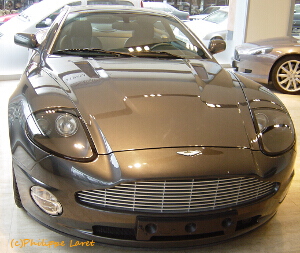 Very close to the Project Vantage, the Vanquish V12 was presented to the press in October, 2000.
Unveiled officially in March, 2001 during the show of Geneva,
its new lines (Ian Callum design) were welcomed with a big fervour.
Which fabulous name for a car of this style,
in mind of the DB7 with a wind of DB5 and DB6.

There was only a step to be exceeded to make a star,
what was made in 2002 during the 20th James Bond "Die Another Day".
V12 Vanquish had undergone numerous modifications
to welcome all the very important gadgets to James Bond (Pierce Brosnan).